This Sunday, we will honor the church's first martyr, along with other martyrs of the church. 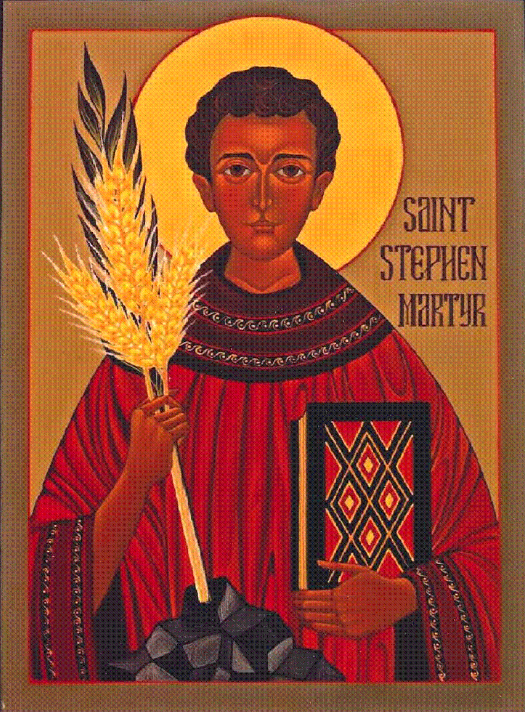 St. Stephen's saint day is December 26. Like the "lucky" kid born on Christmas Day, St. Stephen doesn't get a lot of attention.

So, as a namesake church, we have chosen to take the second Sunday of the Epiphany season to recognize St. Stephen. That also falls on the weekend leading to Martin Lutheran King Jr. Day. Martin Luther King Jr. is recognized as a martyr of the Lutheran church, specifically as a Renewer of Society, "having contributed dramatically to the development and vitality of society."

Most of us know of saints as recognized by the Catholic Church. The process of becoming a saint in the Catholic church can take decades or centuries to complete. There has to be evidence that the individual had heroic virtue, and evidence of posthumous miracles.

Martyrs, who die for their faith, don't have the miracle requirement.

The Lutheran church recognizes and honors many saints recognized by the Catholic church. In many cases, these were early leaders of the Christian church.

The Lutheran church recognizes all believers as saints. It does, however, pull out a select few to honor on its Calendar of Saints. Getting on this list isn't necessarily easy, but it's easier than the Catholic process.

Some on the Lutheran Calendar of Saints are specifically honored as Renewer of Society. This list includes Martin Luther King Jr., Harriet Tubman, Sojourner Truth, Florence Nightingale, Dag Hammarskjold, and Elizabeth of Hungary.

Others are honored for their work living out their Christian (not always Lutheran) faith: Eivind Burggrav was a Nazi resister. George Herbert was a hymn-writer. Thomas Cranmer was a leader of the English Reformation. Jonathan Edwards was a missionary to American indigenous people. Nelson Welsley Trout was the first African-American bishop in the ELCA.

There are only a few martyrs on the Lutheran Calendar of Saints. Stephen and Martin Luther King are honored as martyrs. Oscar Romero was a Catholic bishop who led the Liberation Theology movement. Dorothy Kazel, Ita Ford, Maura Clarke, and Jean Donovan, were Maryknoll nuns and missionaries killed in El Salvador in 1980. Dietrich Bonhoeffer was a German pastor and Nazi resister.

Joining the list as martyrs this year are the Emanuel Nine. On June 17, the Lutheran Church will now honor the nine individuals killed at Emanuel AME by Dylan Roof after they had welcomed him into God's house. Roof was raised in the Lutheran church. Two of the victims attending a Lutheran seminary. The resolution adopted at the 2019 Churchwide Assembly, reaffirms the ELCA commitment to repentance from racism.

So this Sunday, we will recognize the martyrs of the church, specifically our namesake Stephen, but all those who have come before us and died for their faith.

In referring to the ELCA resolution on the Emanual 9, Rev. Michael Vinson said that honoring their martyrdom "[revisits] the sacrifice that was made for the life of the church -- for the church to learn and move forward -- will always hold value. So even 200 years from now, celebrating those nine martyrs will be a point of value even if we have obtained whatever this post-racism world looks like, that it will hold value to show us where we were and what has moved us forward." (The State newspaper, July 30, 2019, Lutheran Pastors want to honor Emanuel AME shooting victims, fight racism.)

Join us this Sunday as we honor the martyrs of our church, those who have helped us to learn and move forward.

Coming Home: to a Place We’ve Never Been Before?